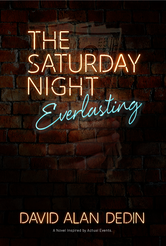 ​Now on sale:
The Saturday Night Everlasting
​
Inspired by True Events
A fast, fun, and fresh revenge comedy, set within the world of restaurant embezzlement.
​Told in the spirit of (an angry) David Sedaris 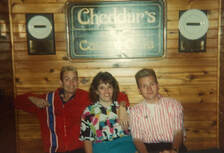 "Look around, everywhere you turn is heartache - it's everywhere that you go...
You try everything you can to escape those bills and debts that you owe.

If all else fails and you long to be something better than you are today
I know a way you can make extra cash, it's called the Void Key, and it's all tax free, so -

​(From The Saturday Night Everlasting, Chapter Eleven)
Thirty years ago, Alan, Patrick, and Guinevere - "the Trio" - became the best of friends while stealing from Checker's Casual Cafe, the busiest restaurant in town.  But the trio didn't just take money - what happened in 91' was no less than diabolical.  Cicadas attacked customers, out-of-hand pranks collapsed the kitchen ceiling, and The Phantom of the Restaurant brought havoc to the dining room - all against a background of blaring 80s music.  Sharon Donovan, the restaurant's general manager, was literally ready to kill someone when police were finally called.

Fifteen years later, Guinevere is mortally wounded in a horrific car accident.  As Alan and Patrick rush to her side, her deathbed confession is chilling: "The worst thing about my depression is that it has a sense of humor."  In her dying breath Gwen asks Alan to take care of Stephanie, her teenage daughter - "As you once took care of me, when we all worked together at Checker's."   And as Steph brings back memories of the best time in his life, Alan makes a very bad decision ...

But karma is a bitch, and Patrick' arrest on returning to his Nevada home makes national news.  His frantic cry for help sends Alan & Stephanie on a cross-country trip - where evidence reveals a disturbing connection between the Trio that began years before Checker's.  It's eerie how current events mirror those from decades ago, and past-and-present stories play out side-by-side.  Without Alan's help, Patrick will go to prison - but as Sharon Donovan learned the hard way, it's often those you trust the most who blindside you with their behaviors...

No matter how far you run, the past will always catch up with you -
And once it does, it will serve a dish best cold.
Dave's Cartoons: The Fox And Friends Presidential Debate So, I recently learned of San Francisco's "filth" problem, caused by its massive homeless population.  Apparently the city by the bay deals with bums in the streets, shit on the sidewalks, and used syringes that are sprinkled through downtown like a fresh coat of newly-fallen snow.  The poop in particular is a massive issue as addicts/vagrants shoot up in the streets, then defecate on the closest slab of pavement.  A local TV station found over 300 piles of human waste while walking the downtown thoroughfares.  A subway escalator was forced to close when its gears became clogged - with feces - because homeless people would shit on the stairs, then watch it grind up at the bottom.   Did you know that San Francisco spends 70 million dollars a year power washing piss, puke, and poop from its sidewalks/streets, only to have the issue return as soon as the cleanup crews go home?  It's a disgusting problem, a failure of local leadership, and a literal shit-stain on the reputation of a city that's known for it's beauty.  Kind of gives new meaning to that classic song: "I left my shart...in San Francisco..."

I mention this because it reminds me a little of what's been happening in the skies above us, as we begin our conquest of space.  With our current technology, space is disgusting ... and the International Space Station is known to smell like a prison.  We've all been desensitized by watching Hollywood movies, and even Ripley's Nostromo had a degree of sanitization.   We imagine space travel is as clean as a Star Trek episode, with luxurious staterooms, carpet in the public hallways, and clean workstations like the movie Life.  But space is really gross, with adult diapers, sweat that clings to the body, and air so filled with mucous, dead skin, and other unintentional human excretions that it looks like pollen in the air.  It's basically like living on a WWII submarine, often referred to as a "stink ship."  As Mad magazine used to say, "Yeccccchhhh!"

​But despite San Francisco-style cleanliness, what's happening in space travel is really fucking cool.  Musk & Branson are neck-in-neck in launching tourists into the sky, and China & Russia have picked up where NASA left off and are racing to the moon again - and beyond.  The twenty-first century is the era that we'll finally leave our planet, and begin to explore the mysteries of the cosmos.  I believe in ET's and that the universe is teaming with life, so this is an amazing period of discovery - and we're lucky to witness it.  I also believe that we're on the verge of abandoning the internal combustion engine, and exploring new technologies far greater than just hybrid cars.  And hopefully, in addition to Space X, Virgin, & NASA, "Dyson" will jump on the interstellar bandwagon and start cranking out air purifiers that will clean the spittle out of the air ...

About
Goodbye to Beekman Place
A Novel of Murder, Mental Illness, and Denial On a cold night in 1980, a young gay man is murdered in the old Beekman Place Hotel in Peoria, Illinois.  The crime is brutal and sexual, and the killer left behind two clues that seem to have traveled through time:  Coca Cola from 1902 – made with cocaine instead of caffeine - and Mrs. Winslow's Soothing Clove Cigarettes, a brand defunct since 1898. With no witness to the crime and no match to fingerprints, the murder remains unsolved.

Twenty-seven years later, Frankie Downs – a writer for OldPlaces Magazine – travels from Chicago to Peoria to research Beekman Place’s nefarious past.  That evening, Downs hits it off with a young gay tenant and a consensual S&M encounter ensues. When Frankie leaves for Chicago in the wee hours, the boy is still alive.  But the following morning, the young man is found dead, in the same style, at the same hotel, and with the same clues as 27 years before. Unfortunately for Downs, in addition to being a suspect today, his fingerprints also match the 1980 crime…but he is not the killer.

Detective Kellie Hogan knows that Beekman Place hides a dangerous secret.  The hotel is the key to a growing series of murders within the gay leather community, and her investigation reveals an ominous connection that’s driving the actions of everyone around her.

But something is very wrong.

Kellie realizes that in order to stop the present day killer, she must journey deep into the hotel’s sordid past to reveal a secret that’s been hidden in plain sight from the moment Frankie Downs began to write his story.

Sample Chapters
"Sometimes I feel the only way I can get a major publisher interested in mental illness is if I find a character who has bipolar disorder and is also a love-sick vampire attending an English school called Hogwarts. But I'm not giving up."…Pete Earley